Why do we need darkness?

Effects of Electric Light – The loss of the night

In the past fifty years, our big city skies have gotten brighter and brighter. Skyglow, a dome of light covering metropolitan areas, can extend to over 25 km in a city of 30,000 in habitants. Street lights, neon signs, flood lights and industrial lighting contribute to the headlight, as do outdoor beamers and lasers, which shine directly up into the sky - NASA's nocturnal photographs confirm that the situation is unlikely to get any better overindustrialized countries of Europe, America and Asia.1

is a unique type of pollution with dramatic effects. On clear nights, researchers from the University of Berlin2 reported an alarming increase of light pollution, now ten times brighter than 150 years ago. On a cloudy night, there is a dark orange hue over the city – the opposite of how it used to be when a clear starlit night was brighter than an overcast one. Depending on the country, the average rate of light pollution increases from 0% to 20% per year, and 6 % yearly in European urbanized countries, although the statistics are sometimes significantly higher in some areas.3

The detrimental effects of skyglow are diverse, lives of plants and animals are being subjected to unnatural changes: plant growth cycles are being disrupted, the nocturnal orientation of migratory birds has been permanently disturbed, and millions of insects are burnt under bright street lights.4 Other species suffer consequences which upset complete ecosystems: water fleas, for example, usually rise up to surface waters of lakes at night (when the risk of being eaten by fish is low) and feed on algae and bacteria. When artificial light penetrates into the dark waters, the fleas do not risk surfacing, staying deep under water, feeding less on algae and bacteria, thus creating an imbalance in the entire ecosystem of a lake.5

Light pollution is a prime problem

for astronomers because it reduces the contrast in the night sky, so they have been required to set up ‘dark parks’, islands of darkness, to study the stars. The Dark Sky Association is committed to establishing and preserving such dark zones worldwide and publishes an annual atlas of current light pollution.6 Astronomers are not the only ones facing a challenge, culturally we are also encountering great losses.  Throughout the ages, stars have guided humanity to new continents, served to keep track of time and to create calendars.  Today, many urban dwellers have never experience a proper star-filled night: some have only seen the brightest of stars, often thousands fewer stars than are visible in and unpolluted sky and commonly in many parts of Europe, many have never even seen the Milky Way.

Are we comprising our health?

Richard Stevens, professor in the school of medicine at the University of Connecticut, researched the effects of electric light on our daily rhythms and physiology. Previously in history, humans had two consecutive sleep phases during a night, with a period of awakening in between. Since the introduction of electrical lighting, sleep has been compressed to a single, seven to eight-hour period. “The importance of sleep to our health has finally been recognized by medicine and by the public. However, the importance of dark is only beginning to be appreciated.”7

The impact and consequences of artificial lighting on our health are being investigated worldwide8: disruptions in our day-night rhythm, sleep disorders and hormonal imbalances have been analysed and confirmed leading to diseases such as breast cancer, obesity, diabetes and depression, all clearly more rampant and related to our modern environment. The effects of the loss of night are profound - for man and whole world.

1 In German: lichtverschmutzung.de oder scinexx.de/wissen-aktuell. In English: nasa.gov/topics/earth/earthday/gall_earth_night.html, en.wikipedia.org/wiki/Skyglow, edition.cnn.com/2017/11/23/health/light-pollution-increase-study/index.html
2 German study by Christopher Kyba and colleagues in 2012: sciencedirect.com/science,15.10.2017.
3 Study by F. Hölker et al.: The dark side of light: a transdisciplinary research agenda for light pollution policy. goescholar.uni-goettingen.de
4 In German: deutschlandfunk.de/massengrab-fuer-insekten
5 In German: daserste.de/information/wissen-kultur/w-wie-wissen/licht
6 lightpollutionmap.info
7 research.uconn.edu/2016/10/03/richard-stevens-university-of-connecticut-artificial-lighting-and-our-health/
8 Above all, chronobiology deals with the question of how light acts as an external clock affecting internal rhythms. 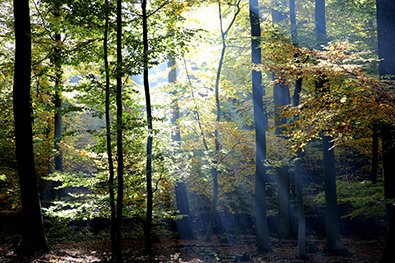 Light influences our moods, attitudes towards life and shapes our daily existence
More > 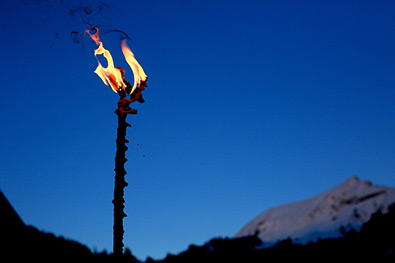 Fire, torches, oil lamps and candles served to lengthen days into the night for thousands of years. A brief history of man-made light
More >
We use cookies in order to provide you a great user experience and to constantly optimize this website. You agree with this by further browsing this site. More information in our data privacy statement.